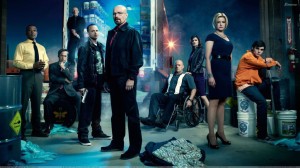 Just finished season 2 of Breaking Bad, #EpicLatePass I know yes, shut up whatever I’m a busy man so there it is. Anyway, I guess everyone already knows it’s amazing and all that but here are some things in the story-craft department that struck me as particularly above and beyond the regular bullshit we’re used to. Mad spoilers ahead, duh.

This comes mainly in the realm of character. Take Ted Beneke, Skyler’s recently-divorced boss/work crush and Don Margolis, Jane’s dad. An average, lazily written show would’ve made Ted a lecherous creep – he’s the protagonist’s love-realm competition so we’re supposed to dislike him. He’d make a pass or be somehow grovely and pathetic, victory would be sweet for how sniveling dude was in comparison to Walt’s awesomeness. Instead, Ted is a decent guy, he’s not over the top, he’s corrupt but struggling with the morality of it (and who is NOT corrupt on this show anyway…)  and Skyler has righteous grief with her lying ass husband. She might even be better off with Ted. Don Margolis appears at first like an overcontrolling dickhole of a dad, through the eyes of his daughter Jane, and we’re all set to see him square off with her and Jessie as they fall in love and get all cutesy. Then Jane relapses and we see Don has been going to NA meetings with her and standing by her, apparently patiently, through her struggle with addiction for ten years. He doesn’t lose his mind and kill Jessie when Jane dies, he just stands there stunned.

Hank is another one. He’d be so easy to write as the idiot cop brother-in-law and in a lot of ways, he is. But he’s also brilliant and it’s clear that he needs to be, because it looks like one day it’s going to come down to him and Walt facing off and Walt is already smart as fuck and learning from each of his mistakes so if things are gonna get real, there better be an evenly matched splay. I’m sure allyall that already know what happens are snickering. Har har.

It’s never just one thing gong wrong on Breaking Bad, it’s EVERYFUCKINGTHING at once. Not just in the finale, in everyfuckingepisode. The most important drug deal ever is about to happen and if it doesn’t they’re fucked and Skylar’s in labor and already distrustful and Walt doesn’t know where the stash is and Jessie’s all fucked up on heroin and and and…it’s awesome.

Which gets to what works overall about the show – it’s not just about a chem teacher turned meth dealer, it’s about surviving cancer. Neither is just a cheap sideplot, each could be the full focus of the show, each gets treated with respect and patience. Most shows it’ll be like A SNARKY ALLIGATOR FARMER oh and he’s also a wall street banker wow! And one or the other will be utter trash, cardboard cut out version of fake ass TV land reality that no one gives a fuck about. 🙂

Cause and Effect But Also, Chaos

There’s an amazing amount of this happened which made this happened which made this happened going on. For ex: homeboy gets shot, so they lose their distributors and Jessie gets high, so they seek dude at the Pollo spot and Jane relapses and gets Jessie on heroin, so they need to make the big deal go down and Jessie’s high, so Walt cuts him out of his money, etc etc all the way through to the plane crash – which to me tipped the boundaries of possibility and relevance some but was still epically built up to. This domino/butterfly effect makes everything so fucking interesting, because nothing happens in a vacuum and each action is buffeted by everything that comes before and after it. This is so much richer than the typical One Off Episode strategy – “this is the episode about time travel! This is the episode about addiction! and so on into oblivion.”

Within all this dominoing though, there’s always chaos hard at work, jacking things up. Obstacles pile on top of each other and when they’re peeled off it’s generally not deus ex machina but some deeply built in mechanism of relief that had been there all along. The old tío in the desert shack that both almost gets them killed by dinalinging that damn bell to alert his sociopath nephew he’s being poisoned AND ALSO saves their asses because he wont’ break the code of silence, even to implicate his sworn enemies. Yes. Saw it coming and didn’t care at all, because it made sense. Built that shit right in. Amen.

Now. Can we have some none drug dealing Mexcian characters or is that too much to ask?

Don’t answer that. And don’t Do Not doooonnntttt post any spoilers from future seasons in the comments sections or I’ll block that ass like Gandalf. Thank you.