Lovecraft scholar S.T. Joshi posted a rebuttal to my petition to change the World Fantasy Award statue to Octavia Butler and I want to respond to a few points in it. Joshi begins by dismissing my claim that Lovecraft was a terrible craftsman: “I believe it is now sufficiently well established that Lovecraft was in fact one of the great prose stylists of the English language.” I was surprised to read that statement because I’ve never seen anyone praise Lovecraft for his prose. Even his fans admit he’s a pretty wretched wordsmith, an overwriter. And while one can certainly overwrite and make it worthwhile to the reader – Poe for instance, who Lovecraft admired, was a helluvan overwriter – Lovecraft’s constant strings of adjectives and adverbs were both arhythmic and redundant. Butler on the other hand, came with curt, careful sentences that told us exactly what we needed to know. Her economy of prose was precise, confident, sharp.

And let’s discuss character and storycraft, since all of these come into play within the larger question of craft. Lovecraft peopled his stories with a slew of mostly middle-aged white men with the emotional bandwidth of hamsters; they felt uneasy, terrified…anguished. And that’s about it. They were intellectuals and sometimes random townsfolk, but not much else. They ran for their lives, occasionally fought off giant monsters, did some research. They existed primarily as a foil for the comparatively well-developed creatures. Butler’s characters were, in a word, alive. They struggled, loved, laughed, cried and we cried with them, for all their chaotic flaws and desperation. They were people we knew, people we’ve loved and hated.

Lovecraft’s stories often weren’t even stories, just ideas floating glumly along through paragraph after paragraph of wordiness. The ones that do have an actual plot tended to be scattered and leave us wondering why: Why should we care about the character? Why was the story even written? What…even…happened? Butler’s narratives brought us deftly along through the treacherous highs and lows of each protagonist’s struggles with a complicated array of power imbalances. She showed us many forms of violence and survival. The internal and external conflicts blend seamlessly and force us to interrogate our own relationship to power and privilege, all while avoiding simple didacticism or preaching. Butler gave great story.

Finally, Joshi raises the point that Butler wrote science fiction, not fantasy. Lovecraft wrote mostly about beings from outer space and other dimensions that infringed on this world. He’s considered a father more of the subgenre weird fiction than fantasy. His tale The Horror at Red Hook could be considered a precursor to the still-gentrified category of urban fantasy, but he wrote more science fiction-tinged  horror than fantasy. Butler did write science fiction. And she wrote about immortal shapeshifters, vampires, time travel, humans with magic powers. She wrote fantasy and horror. She influenced a generation of fantasy and horror writers. And anyone who hasn’t figured out that genre is a messy slipstream with no clear borders isn’t paying attention.

Mr. Joshi spends the majority of his essay arguing against a point that I never raised – the idea that Lovecraft’s race and gender somehow disqualify him. Joshi also wonders aloud why no one gets mad about Lovecraft’s atheism, as it was “equally obnoxious” to his virulent racism. Neither point merits a response, except to say that their inclusion in the post makes painfully clear the need for writers and scholars alike to do our homework when it comes to race, gender and power, lest we one day want to say something about them and not sound desperately ridiculous. Of course, it’s easy to make up points to argue against, which explains why Mr. Joshi so quickly swept past the crucial question of craft.

I absolutely don’t think someone as hateful as HP Lovecraft should hold such a symbolic place in the genre. Beyond that though, it matters that his writing suffered for it. His already stale protagonists defended themselves from sweltering masses of dull clichés: the same stupid, evil brown and black folks that white writers have been conjuring up for centuries to justify imperialism and institutional racism. A craft failure and human failure of epic proportions.

We can appreciate Lovecraft’s worldbuilding brilliance and imagination and still see him for what he was: a hateful human and a crappy wordsmith. And we can embrace a writer that changed the genre with the depth of her humanity, the sharpness of her power analysis, the ferocity of her words and stories. Let’s do what our genre asks of us and imagine this world the way it could possibly be while being honest about the way it is. 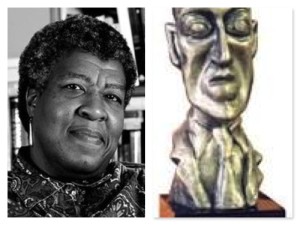 38 Replies to “On Butler and Lovecraft: A Response”