It’s still dark out. The tops of buildings on my block are silhouettes against the beginning of daybreak. A few lights come on; everything is so quiet. 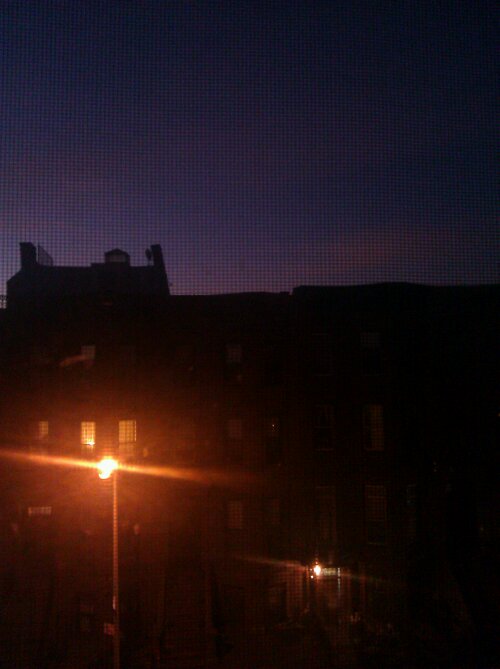 I’ve used this still-pretty-new blog to unload a bunch of heady thoughts so far – not sure anyone’s visited except the pornographers and pharmaceutical companies that like to post their all caps attacks on English grammar in the comments section. But it’s time to start being a human being on here, talking about where I’m at and what I’m doing with all this writing and life and reading. Because that’s the point, no?

Today is the first day of #WriteThursday. Why Thursday? Because that’s the day of my workweek I dropped to make room for writing. It was the biggest pain in my ass day on the ambulance – because of the hospital I was working at, not because Thursday is anything crazy in its own right – and from here on out it’s dedicated to doing what I do.

So what am I doing? Right right now, I’m writing a novel. It’s called The Book Of Lost Saints, it’s a bigger, more ambitious, more ridiculous project than anything I’ve ever done before and it’s so far been the hardest thing I’ve ever written. Which is why I love it with all my heart and how I know it’s exactly what I’m supposed to be working on. I’ve written about Cuba in so many ways throughout my life but never directly. I grew up hearing stories about it, that beautiful, heartbreaking mix of mythology, memory and history, went to college and heard a whole other set of stories about it, a whole other mythology. Went for myself and knew a new kind of heartbreak as I lived my own myths about it, ones that I’ll one day tell me kids and grandkids. And it shows up in metaphor and motifs all through my stories, little moments and hints here and there, but never never like this.

Book Of Lost Saints is about a Cuban-American hospital security guard and DJ named Ramon. The narrator is the spirit of his long-lost aunt; she disappeared during the revolution, a presumed suicide, and watches over Ramon, giving him glimpses of her own troubled life through his dreams. So, a lot is going on. The dreams lead Ramon to try and find out what happened to his aunt, chaos, intrigue, adventure, sex ensue. Alladat.

I’m about 2/3s of the way through the first draft. I’m in that plow through best you can stage, gonna sort it all out later, throw everything up in the air and go in machete swinging when the time is right, but for now it’s just write write write Ogun like smash through the wilderness to new territory and find out what happens. Which brings me to the word Sendero, which I’m using for these writer updates. El sendero is the path, I’m taking it from a poem. No. Not exactly. The poem says, camino, not sendero:

By the great Spanish poet Antonio Machado. But sendero serves my purposes better, because I said so. The sentiment is the same though. We make the road by walking. Our own footsteps form the paht. This is writing, both the process and our journeys as writers. There is no map, no damn gps. We go, moving forward, finding our way, getting lost, realizing we’re never, never truly lost, starting over.

This is my path.

One Reply to “El Sendero: Morning Pages and For the First Time, Cuba”