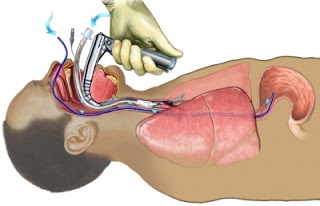 The guy’s ancient, all flaky skin and withered bones, body permanently contorted like a gnarly tree. Plus, he’s in a nursing home, and quite frankly when we get any job in a nursing home we’re surprised to find the patient alive at all. This fellow is indeed alive, but only barely. His lungs are gunked up with pneumonia, his blood pressure’s low, his temp is high and his heartrate is all over the map. He’s septic and probably has been for a while. Sepsis becomes lethal when the body feels so threatened that it opens the entire vasculature up nice and wide in an attempt to flush out whatever nastiness has entered. The blood pressure drops and the heart eventually gives up when it can’t find anything to pump. It’s similar to an allergic reaction but the patient’s already in a weakened state and becomes febrile and lethargic.

To top it off, our guy had almost no oxygen saturation. That means the percent of o2 getting to his blood stream, which in a healthy person is upwards of 96%, was down around 82%. This number is complicated by the fact that he suffered from chronic lung disease, which keeps your sat numbers down even when you’re not acutely ill. He’s moving air, although not much, and his mental status is impossible to really gauge because according to the staff he’s either agitated or vegetative but never makes sense. Right now, he’s agitated and makes no sense.

So what we have is a decompensating patient. We have a few things we can do for him to keep him from checking out on the way to the hospital but really he needs lots of antibiotics and to have his position in bed changed more than once every couple days. To keep his pressure from bottoming out, we put two of the biggest IVs we can on him and start dumping fluid through them. This helps fill those wide open vessels and gives the heart something to pump.

His breathing though, is another matter. Even with a mask blowing high-concentration oxygen straight into his face, that sat is still hovering in the mid eighties. By some standards, that number alone would get the guy intubated but most medics know better than to treat a patient by numbers or monitor readings. The problem is this: intubation is an invasive, complicated procedure. When you do it on a live patient it often requires sedation, which means further depressing his respiratory drive and mental status. If he’s far enough gone to be intubated without sedation, you still need to lay him supine, which is a bad position for patients struggling to breath, open his airway enough to see those vocal cords, wait for them to open when he takes a breath and then put a tube between them, all the while depriving him of oxygen. Either way, you risk stimulating the all important vagus nerve, which runs behind the throat and slows the heart rate. In such an unstable patient, vagal stimulation could easily spiral them into bradycardia and then death. Also, intubation comes with added risk of infection, especially in the pre-hospital setting.

Of course, a tube means a secure airway, and this patient’s breathing is far from stable. Once the tube is in your pumping oxygen directly into the lungs. The question then becomes: is his situation unstable enough that it’s worth risking tipping things even further with intubation or will he hold out to the more stable environment of the ER, where they have paralytics, other airway options, bright lights, non-swerving through traffic surroundings, etc etc…? Of course, it’s case by case, there’s no one answer.
I try to gauge how acute a situation is based on how the patient responds to our lesser invasive treatments, how the pathology changes in the short time we’re one scene. A lot can happen in 10 or 20 minutes. Someone in Acute Pulmonary Edema, for example, can go from mild distress to having fluid filling up to the top of their lungs and coming out their mouth in a matter of seconds. Or it can take hours, days even. With septic patients, especially in nursing homes, it’s particularly hard to get a good history because they’re often not with it enough to tell you (and neither is the staff).
So you look at what you have. If I’ve been on scene for half an hour and the patient hasn’t declined sharply I tend to cautiously put more aggressive treatments to the side. I say cautiously because an unstable patient is an unstable patient, so the tube kit is never far from my grasp.

My partner wanted to intubate this one. I see where he was coming from but to me, it was an unnecessary risk. I’ve seen medics go to tube very similarly situated patients and ended up pumping on their chest. We went back and forth a few times in that respectful, quiet way that you have to use when you’re on scene and there’s other people around. I had a sense that the patient wouldn’t put up with much tinkering around since he kept pulling the oxygen mask off; we agreed my partner’d take a look and see how it went but not push it. When he went to open the airway, the guy slapped him across the face. Sometimes, the patient will tell you all you need to know about a situation. If they’re messed up enough to consider tubing but strong enough to deck you, they’ll probably make it to the hospital, which this dude did.

3 Replies to “TO TUBE OR NOT TO TUBE”