I was gonna write about death again- but I do that  (…reading back over old posts..) A LOT o_O
so instead I’ll talk about um…oh crap this ones about death too but whatever…THE MOST SKEEVED OUT I’VE EVER BEEN.

it wasn’t on the evisceration, or the lady who’s leg was hanging off or any of the crazy shootings stabbings rectal bleeds or other bloody disasters I’ve been on. This might even come as kind of a let down, cuz people at parties are always asking me: What’s like the CRAZIEST ISHT You’ve EVER seeeen? And this definitely was not it. But it skeeved me to the bone none the less.
We were riding with this Hasidic kid that night, a student, and some of his boys were on the Hatzolah truck that works nearby- Haztolah is the all Hasidic ambulance group- and somehow they’d gotten a call for a jumper down- it was one of their guys and I guess he’d gone from the roof of one of the all Jewish projects on the Williamsburg/BedStuy border (yes there are Jewish projects). We were nearby and the kid wanted to meet them at the hospital and lend a hand, whatever, see what they’d done, learn something i suppose, so I rode over to let him take a peek.
Hatzolah is famous for rolling deep. They call it the clown car cuz the bus rolls up and nojoke like eight little bearded EMTs will pop out, all muttering at each other in Yiddish and usually dressed in tshirts and sneakers. But for some reason, that night, there was no one there, they all musta hopped out and scattered, or maybe they all decided to go in and notify the hospital together, the way girls flock to the bathroom. Either way, it was just this one little sad yarmulka’d fellow left to bring in the patient. Even my student was nowhere to be found. 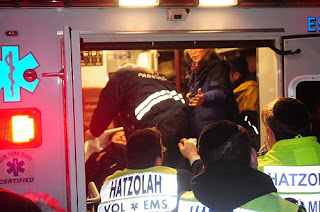 I really don’t like to get involved in other people’s jobs. It’s wrong for so many reasons but you can’t roll into the hospital with a traumatic cardiac arrest and no one’s doing CPR, no one’s giving ventilations… It’s not because the guy might make it- that was definitely not going to happen- it’s just a really bad look. it’s like showing up to play baseball wearing a tutu. You dont do it. So like a idiot I gloved up and positioned myself on the stretcher to start pumping the guy’s chest.
Considering that he’d come down from a PJ, i was surprised that the dude wasn’t splattered. He was  white- literally white not just racial construct white- pale as a piece of paper, probably his internal organs had exploded and the blood was scattered inside somewhere, and his feet were pointing in all the wrong directions, surely from having been landed on. They said he’d just gotten out of woodhull’s psych ward and that Jews who suicided weren’t allowed to be buried in Jewish cemeteries but since no one had seen him jump, he might’ve been pushed or it might’ve been a freak accident and he’d get the benefit of the doubt.

Anyway, on my third or so compression, one of the man’s chest hairs caught me right where the glove stops and my wrist begins- that tendon right there? YO. It was like the long finger of Father Death tickling my soul and NOT in a good way. I can’t tell you what it was that eeeked me so much about that all i know is within 2.7 seconds I was off that stretcher and halfway across the street yelling “OH HELL NO!!” and making all kindsa faces. By that time, some other Hasids had materialized and took over but I couldt’ve cared less to be honest with you, I was DONE.

2 Replies to “THE MOST SKEEVED OUT I’VE EVER BEEN”