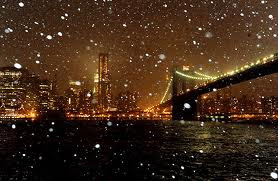 Since the snow is once again billowing down on NYC I thought I’d take a second to recall my lovely experience during the original Snowpocalypse 2011.

It started coming down heavy midafternoon and Brooklyn was already completely blanketed head-to-toe in white (omit gentrification joke) by the time I got to work at 6.  There were no plows out, barely any buses or cars and only a few scattered people here and there. Our first job took us from Brooklyn Hospital to Fulton and Kingston, which on a normal day isn’t bad but during the arctic death blast turned out to be quite a trek- didn’t want to drive too fast because it took me about 3 blocks to come to a full stop, but I didn’t want to stop either because that meant maybe never starting again. PLUS every three to five minutes the back of the bus would jacknife around and try to pass the front. When we get there, a solid twenty minutes later, the radio’s crackling with units responding two a double shooting not far away, one of the victims is dead and the other’s critical. Our patient though is upset because every time the wind blows in her face she becomes short of breath.
Are you short of breath now?
No! Ze wind she is not blowing!
Do you want to go to the hospital?
But of course! I could not breathe!
The hospital, mind you, was around the corner, but she wanted to go to another swankier one across town. That didn’t happen. When we dropped her off at the crummy around the corner hospital the shot guy’s homeboys were just getting there and running rampant around the ER looking for their friend, who was resting in peace under a sheet in the resus room. When they found him they erupted into a barrage of curseouts and revenge promises and we left outta there, turned onto the completely snowed in Atlantic Ave and immediately almost got stuck. But we didn’t, barely, and made it back to Brooklyn Hospital. 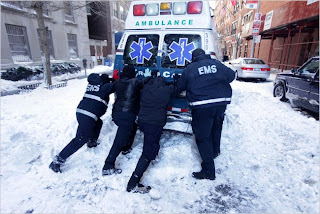 Meanwhile- the radio is nonstop with units getting stuck. I mean- EVERYONE was in a snowbank somewhere, completely snowed in and once they came up on the air to report getting free it was usually on a few minutes before they were stuck again. This meant, besides the huge backlog of jobs building, that paramedic units were getting assigned lower priority jobs and EMT units higher priority jobs, just because the dispatcher was forced to hand out jobs to whoever might be available at the moment.  Total disaster, in other words. Meanwhile, not a plow in sight.
We got stuck on Fulton and St Felix for like ten minutes, dug out, got stuck again a block further, dug out, got another job, took us about twenty-five minutes to get five blocks away for a kid that bumped her head in the PJs and thennnnnn lord have mercy they sent us to Red Hook.
Now, for those of you that don’t know Brooklyn, if downtown Brooklyn is on some Day After Tomorrow Code Three disaster status you KNOW a backalley boondocky spot like Red Hook is gonna be all the worse. We got detoured by a jacknifed tractor trailor and ended up winding along Van Brunt Street, which runs by the dockyards. Then we hit a non-moving line of cars, tried to turn off down a sidestreet and got really really really stuck. A couple neighbors came out to help us dig snow along with a happy little Pakistani guy who was stuck behind us and an ornery Mexican that came down the wrong way and got stuck in front of us.  Finally we dug out, backed back onto Van Brunt and got stuck again. This is when the wind picked up and started bullwhipping icy snow into our faces, thank you very much.
My partner, who was in the back doing her hair while I jolted the bus back and forth trying to lurch us out, puked. Then she cursed out almost every element in the natural world and went back to doing her hair.
It was getting on towards midnight. The radio was still crackling with units getting stuck. I added our names to the list and gave up. We’d moved a half a block in two hours and were only deeper entrenched than before. I had some cold coffee and two chicken wings and three quarters of a tank of gas.  The snow was up to the doors. I tweeted. I gchatted. I laughed. My partner woke up around 3 and started cursing again and went back to sleep.

The radio never stopped chattering with units and they’re stuckness except now none of them were getting unstuck, they were just holing up like we were. For a while people were updating, cuz EMS is really update-retentive about crap, you always gotta account for yourself if you’re somewhere too long or they start coming for your wig. But during snowpocalypse it just got relentless and the dispatcher  started coming up on the air with this whole “OK, Units, I know you’re stuck. If you’re still stuck, don’t update, I know it. Just be quiet. If you get unstuck just hit your button. I don’t need the updates. Thank you.” And then it’d get real quiet, cuz frankly that’s all that was happening. Then of course every couple hours some horrific exchange would go down- a unit would get to an Abdominal Pain and find someone lying dead in the street instead and then all the units trying to back them up would get stuck on the way and then they’d get stuck and be screaming on the air like some horror show… it was not fun. 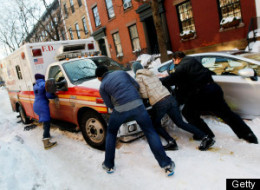 I think the first time I saw a plow it was after midnight, and- surprise surprise, it was stuck.
I slept from dawn till 8 when some firefighters trudged up to our happy little embankment and informed us that we were stuck.
Oh crap really?
Looks like it.
Well gee.
You got a supervisor you can call or somethin’?
…
We trudged the five blocks to their rig and they gave us a ride back to our base where we dried off, coffeed up and then i jumped into an SUV with this old Jamaican cat that was going to help out our other unit.
Basically nothing was plowed that morning except Atlantic Avenue, some of Fourth Avenue and a few of the major throughway streets in Bed-Stuy. A few. We were lucky enough to fall in behind a jeep full of Mexicans with shovels who happily jumped out every time a car got stuck in front of us and dig them out and then whizzed past them laughing. That’s the only reason I made it home at all. 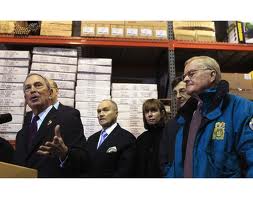 Made it to bed sometime that afternoon and woke up to hear the Mayor blaming EMS for our shoddy response time.

3 Replies to “STUCK: A Long Night In The Ambulance During Snowpocalypse 2010”