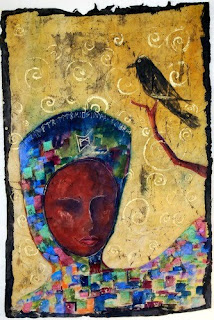 It’s funny because it was blogging bout the ambulance messes that re-opened up the writing part of me. Spittin out these weird little vignettes that I’d throw together from memory in 20 min btwn calls reminded me of a simple rule of writing: just tell the fucking story.

Seems so obvious but I see how not remembering that caused some real blockage in my creative output over the years. Get so damn caught up in angles and analysis and voice—nothing happens. My big overeducated head a dang boulder on the path.

So it makes sense that I’d start throwing in some thoughts on the craft of writing among these twisted true life tidbits. The ambulance work feeds me, literally and literarily, because what better fodder for a writer than night after night of humanity’s tiny disasters? Even the boring shit’s a nice little packaged short story (repeating again and again…) and rather than falling in 2 the cliched role of passive observer that we writers are prone to, the medic is unavoidably, irrefutably and literally arm deep in the shit.

So these notes on writing won’t b as gory or ridiculous as the ambulance ones but they will b curse-laden and spiritually engaging. Yes, spiritually.  And they’ll be clearly marked so u gorehounds can disregard @ will…

So Today’s Topic: Just Tell the eFfin’ Story. Much as I believe in the other timeless wrtier’s rule: Ass In Chair, I’ve logged many a-blank stared hour in this chair and wound up with blank pages. Or the inverse: pushed hard and cranked out pages and pages of utter uselessness. I believe in freewrites something fierce- it’s the best way 2 dislodge that thought-fraught brain and clear writer’s block. But for me, thrusting forward towards a word or page goal isn’t the way 2 go.  (For other writers, wordcounts are the beesknees: http://thewordsofawriter.blogspot.com/2009/10/i-love-goals-for-writing.html )

I am though, a big fan of the Outline.  Right behind me, winding across my wall in a serpent of post-it notes, is the outline of the novel I’m deep into. (A sample: http://tidepoolfiction.wordpress.com/2009/10/01/flatbush-spirit-dance/)  Actually, there’s two intertwined strands, one a completed work and the other a completely different strand of that forking off at page 30. It’s a roadmap- guarantees that each time I sit down to write, I’ll know where I’m going, where I am and where I been. That way, the work on the story itself happens all the time, on the train, in the ambulance, in the shower, while I’m treating a patient- whatever, and gets scratched into my handy blackberry, spat onto my wall and then the writing time allows me to throw away all other concerns and Just Tell the Fucking Story.
Which is what writing is all about.

2 Replies to “ON WRITING 1: Just Tell The eFfin’ Story”