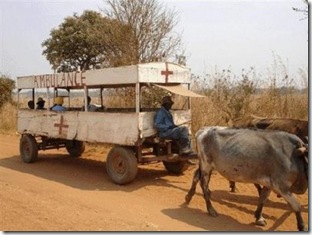 It was daybreak and the daytour was giving me a ride home. We were just pulling off from the ER bay when a dude came running up to the ambulance. Now…when people come running up to ambulances about 90% of the time it’s to either ask directions or tell us about how their friend’s like sooo totally drunk could you just like take her blood pressure or whatever. So, excuse us if we don’t get really excited when folks come tapping on the window. Anyway, it was still dark out and we couldnt quite tell which of the 2 this guy was until he said “Yo, some old dude just got fucked up over there!” Still…this could mean sooo many things, but we rush on over and sure enough, there’s a car sticking out of a building and an old dude crumpled on the curb next to it. And yeah, he was pretty bad, because as we were approaching I first thought he was just a pile of random debris, so still was that old dude. Usually when you mistake people for inanimate objects it’s because they’re dead, but this guy actually took a breath just as we started going to work on him. So he wasn’t dead, but he was an absolute complete damn mess. The bystander’s description actually turned out to be pretty accurate. I’d thought he had been in the car and either been ejected or stumbled out when it crashed. Usually when people are ejected though they’re like, across the street or in a tree somewhere, not right right there. What actually happened was the guy’d been on the far adjacent corner, minding his, when a carload of drunken patygirls barreled on through, clipped him and sent him in a massive acrobatic airborn spin across the street and onto the curb. To hear the witness tell it, the guy’d done like three pirouettes and a butterfly kick on the way (“Yo, his legs went up like this and they kinda did one a these and then he rolled up and over” like it was all in slowmo…).
Anyway, then the car had swerved and smashed into the wall, the gaggle of hoochie mammas all hopped out at once, clucking away apparently, took one look at the patient and screamed, simultaneously “YOU KILLED HIM!” and clackity-clacked off towards Flatbush in a perfume flavored huff. The driver, a really irritated looking dude, was standing there talking to 911 on his cellphone when we rolled up, trying to make it sound as little his fault as possible (“No, the guy musta been drunk! Walked right into my car!”)

We call for backup, put the patient in the back and take a look at what we got. The left tibia is pretty much shattered, his left arm is pretzeled and there’s an open wound where the bone broke, and he’s got more than a few ribs that are in many many pieces. Also, he’s got a buncha little cuts and bruises and whoknowswhats going on with his head. We have him boarded and collared and nothing seems to be actively bleeding anywhere, although there’s blood EVERYWHERE.
He’s coming around, which is wretched for him in the short term but ultimately is a pretty good sign. What’s not good is that as we’re getting ready to go the genius that hit him decides he has neck and back pain and needs to go to the hospital too. I’ve been in this situation before, and it sucks. Since there was no other ambulance on scene, it means we can’t leave without technically abandoning a patient and opening ourselves up to colossal lawsuits, getting fired, all kindsa stupidness.
We come up on the air, tryna express the urgency of the situation without cursing, and then get back to caring for the patient while we wait for another unit to show up.
At this point i remember I’m off duty. Not only off duty, I’m wearing some a spiffy all white suit (for a change) that miraculously has remained bloodstain free up to this point. I’ve always said if some mess goes down while I’m not on the bus you probably won’t be seeing me leaping across the street to stick my fingers in the muck. It’s not that I don’t care about my fellow humans- I wouldn’t be doing the job if that were the case- it’s just that without any equipment there’s really not much I can do for you. CPR…that’s about it. Anyway, here I was in my civies, off the clock, and yet I had a bus full of medic goodies to play with. What struck me though, as I was reaching over the crumpled up old guy to put an IV in, was how different it felt, being out of uniform and dealing with all this mess…It seems like a small thing, or it did, but the mental space that wearing those techpants and button shirt and having that heavy belt on put you in is thoroughly somewhere else from the I’m-just-walking-down-the-street-in-my-nice-white-suit mental space. Like, a whole other planet. The physical act of gearing up, clocking in, checking out the ambulance, carrying around that chattery little radio…it all serves to ground us into that realm of service- a singlemindedness that I’ve spoken of before that can be so cleansing when it climaxes in the thick of a brutal job.
Without all that, i felt naked.
The other unit finally skidds up and we speed off. The dude’s talking and conscious by the time we roll into Belleview. The sun rises. I help the daycrew clean out the back of the bus. scrubbing away blood, picking up shredded clothing and bandage wrappers. I wonder, as we made our way back to Brooklyn along the East River, what life will be like when I’m done with this job for good and no longer spending half my week intimately wrapped in the ridiculous and tragic beating heart of the city around me. I think I’ll miss it.