I took this little hipster dude to the hospital seven years ago; he’d left his apartment door unlocked and then got pistol whipped when he came home to find someone going through his stuff. Now why would I so clearly remember a minor injury from ages ago? Because in my eight years working EMS in Bed-Stuy, East New York, Harlem and the Bronx, that was the singular, solitary white patient I’ve had who was a victim of violence at the hands of a person of color.  I remember sitting in the Woodhull ER with him. He was holding an ice pack to his little forehead gash and going “God! I can’t believe I got pistol whipped! It’s like…it’s like a movie!” At that point I had already given up checking the newspapers in the morning to see if any of my crazy jobs from the night before would show up. They never do; the patients are all black and brown and their tragedies, no matter how gruesome, are automatically deemed run-of-the-mill and unworthy for news attention.

In general, the white patients we get are either little old ladies, drunk Polacks who tried to play frogger across McGuinnes Boulevard, college kid anxiety attacks and overdoses. We also get the occasional “All these Black people are trying to rape and kill me so I can’t leave my apartment!!” and sometimes “I stopped taking my meds and I’m about to do something really really bad.”

All this is to say that the amount of time and energy that white culture puts into being afraid of the crimes that will be committed against them in the ghetto could be better spent thinking about something that actually happens. 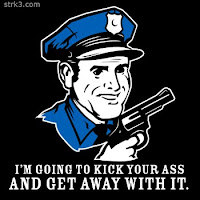 For instance, white on black crime, which we see faaaar more frequently. A lawyer was interviewing me the other day for a case they wanted me to testify in. A patient I’d had who’d also been pistol whipped, also seven years ago, this time by cops, was suing the NYPD and this lawyer was trying to take apart the guy’s story.  He showed me a picture of a middle aged black man with a swollen lip and busted eye and asked me if I remembered him. I had to laugh. “Do you have any idea how many times a week I go to the precinct to take care of black men who’ve been beaten by cops? Plenty. Times fifty-two times eight. No I don’t remember that dude.” Or the kid I met last night, who’d been cardoored by a police cruiser and then arrested before he could get up, all for riding his bike on the sidewalk. Or Iman Morales, who was naked on a fire escape in Bed-Stuy having a psychotic fit when PD tasered him, causing him to fall to his death. Or Sean Bell. Or Oscar Grant.
And then there’s the entire 81st Precinct, who’s institutionalized racism was recently unveiled by a defecting whistleblower and thoroughly detailed here.

Most white on black crime happens without the majority of whites having to perpetrate a single violent act. Another unspoken benefit of white privilege is the ability to win without  even having to fight. Gentrification, and the uprooting of communities that it entails, will happen regardless of how the incoming hipsters feel about their neighbors; the pieces are already in place, the gears turning. 911 doesn’t get called- it’s a slow motion race riot, which history has proven can be the most devastating kind.

6 Replies to “NOTSOMUCH: The Truth About Black On White Crime”