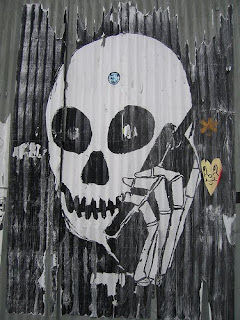 I guess if I’d been shot twice in the face there’d be some people I’d like to call too, but if the paramedic told me to lay down and stop moving that’s what I’d do. Not this dude. This dude is too busy cursing someone out on the other line and swatting off the EMTs while they try and fit a c-collar on him.
I hop on the bus and put on my I’m-not-kidding voice: “Sir, you have 3 bullet holes in your face. That means 2 went in and only 1 came out, so there’s a bullet rattling around somewhere and if you move too much it very well might dislodge and end up in your brain.”
“But…”
“And then you’ll be dead.”
He relents and lays onto the board, lookng irritated at me . (I’m not the one that shot him…whatever…) the emts collar him up and strap him down and I yell to the driver to take a not-2-crazy ride to King’s County. If you don’t say that you end up hitting a bump at mach 7 and all kindsa mess can ensue. Especially because when the ambulance roars off me and my partner grab the biggest needles we can find and start poking the patient with ’em. To get the IV of course- not cuz he’s being difficult.

The first bullet entered the ridge of his cheek bone just below the eye, transversed his face somewhere between his eyes and nose and exited through the opposite cheek. The second bullet entered slightly lower than the first and is who-knows-where. Miraculously, the dude’s vital signs are all stable, he’s mentating perfectly well and the only bleeding is a little clottiness around his nose. Still…trauma patients and kids (see next post) can look perfectly fine one second and die the next, so we keep a steady eye on him.
Before we get to County he swears he doesn’t know who shot him, gives a false name and fields two more curse-laden phone calls.