Skip to content
When the word INBLEED pops up on our screens as a call type it inevitably means the next hour of life is gonna be either messy and stupid or boring and stupid. This is because INBLEED is the kind of call you become when you tell 911 you’re bleeding out yer butt, so the range is from “I have hemorrhoids” to lying dead in a lake of blood. That was actually a job I had a couple years ago- start as a INBLEED, turned into an UNCONSCIOUS while we were on the way and then a CARDIACARREST when we rolled up. Sure enough, the landlord met us at the door with the delightful words: “He has HIV and Hepatitis and he just vomited up all the blood in his body and died.” Sure enough, the damn room was painted, floor to ceiling with bright red blood (bright red means it’s recent, dark coffeeground blood means it’s old. For w

hat it’s worth) and there was a dead guy lying in the middle of it all. 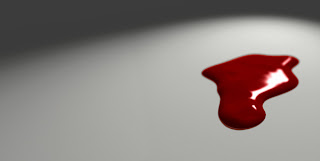 Anyway, you basically treat a true internally bleeding patient as if they were a trauma: they need a big IV with lots of fluid going through it and they need to get to a surgeon ASAP, no time to play. But that’s really the very rare exception that shit turns out so dramatic. Most, like 90% of em turn out as
“yeah I found a streak of blood in my stool, wanna see?”
nope.
or “I just vomited and there’s some red in it.”
What were you eating?
“Cherry ice cream with beets and ketchup.”
Hmmmm.
BUT anyway, by whatever odd logic of the EMS gods was at work last Monday, we ended with 3 inbleeds in a row, spanning the whole range of madness. The first was a chick from a shelter who’d just had a little dab a blood here and there whenever she did a number 2 for the past three weeks. Ok, doo dee doo, let’s go. Second was basically the same thing but the guy tried to fake a seizure on the way out cuz he didn’t think we were paying him enough attention. Then the last guy- he made like he was alright, even convinced himself he was I think. He’d had a near syncopal episode (almost fainted) coming back from the bathroom and while he didn’t have any active bleeding, he’d been diagnosed with a bleeding tumor and a stomach ulcer. But the dude wasn’t showing any signs of crashing or even being shocky at all, no dizziness, wasn’t pale, wasn’t weak, his blood pressure was fine, heart wasn’t racing. Did you know when your bloodpressure drops your body realizes it and makes you thirsty so you can compensate the fluid loss? That’s why so many trauma patients’ last words are “can I have some water?” and then they die.
Anyway, this dude had none of that, and he wanted to walk, so we said alright, but kept a sharp eye on him as he stood. Halfway to the door, right in the narrowest part of the hallway, he went gray, flung his arms out to either side, rolled his eyes back and collapsed. Man…
The boyfriend starts yelling about how he always does this (!?) and why he have to be so macho, then their cat starts hollering and carrying on too, and meanwhile my partner’s passing me the IV line and needles while I’m making sure dude isn’t in arrest. It’s tight in here, mind you, like one person at a time tight, and the patient’s large and in charge, but fortunately, not dead. He still needs an iv though, so I wrap the rubber cord round his big ol’ arm and start feeling round for a plump vein, but there’s NOTHING, not a damn thing. He’s waking up now, talking bout –oh I feel better now I can walk? and his man’s like –oh HELL no, boo! And I’m like, dude- where’s your veins? But like I said, he’s fat and probably bleeding out somewhere deep inside, which depresses already hiding vessels. Grrr. Then to top it off, it turns out when I do take a stab at something, his skin is alligator thick. Like, you have 2 put shoulder into it to get the needle through, which sucks for everyone. So he’s screaming and yelling, the bf’s like “man up” in a startling about face from his earlier position, and my partner’s peering over my shoulder tryingto see if my IV any good or not. I push hard, break skin but get no flashback, no love whatsoever from those escondido mothafuckas. We try twice more but with no luck.
He still wants to walk, which is generous to our backs but unfortunately, not even remotely possible. Just sittin up he gets dizzy again, so we call for a backup truck, pull out the scoop and ease him onto it. Takes some serious heave ho’ing but eventually we get him hoisted up, down the skinny ass hallway and into the ambulance and then carted safely and happily off to the hospital.

One Reply to “BLEED IN BLEED OUT”