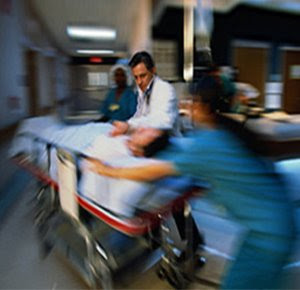 A lot of my posts end with some variation of this: “And then we zipped off into the night…”

Right. That’s because that tends to be the moment when our active part of the story ends. But what happens after all that frenzy? On the way, we’re keeping things in order, check and rechecking things. Often we’re climbing over each other, grabbing whatever hand holds we can while the bus screeches around a corner. Sometimes there’s a cop back there, looking puzzled. We’re taking blood pressures, making sure EKG leads are still on, squinting at monitors, maybe getting another IV. Jobs can be so dynamic: you can start with one kinda mess and wind up with a whole other one in a matter of seconds, and the body has so many ways of reacting to trauma. Sometimes a seizure is a seizure, sometimes it’s a sad grasp for attention, sometimes it’s the first moment of cardiac arrest. People turn so many different colors for so many different reasons.

Then we finally pull up to the bay, the beep beep back up and the bump against the tire holders. There’s a final scramble to get everything disconnected and loaded onto the stretcher and then we flood inside, sometimes one riding the stretcher, pumping up and down on the guy’s chest as two others guide it through the linoleum hallways into the waiting arms of trauma surgeons, interns and anesthesiologists. There’s the hectic, fragile inbetween time, as the care for the patient goes passes from us to them, and their machines and protocols whirr into effect and we tit for tat back and forth, summarizing the past wild half-hour in a 30 sec soundbite (not unlike the elevator pitch, now that i think about it…)

Some doctors make a point of not giving a fuck. They talk over you, look away as you give the report, roll their eyes, ask you the same question five times. Even with EMS being what it is, still seems a hard concept for some doctors to grasp that, if we do our job right, a patient who was critical ten minutes ago is chilling by the time they show up at the ER. So sometimes we have to explain ourselves very explicitly, sometimes we do our best and then walk away shrugging. Other docs are extra EMS-happy, all up in our process, how’d it go, what was the apartment like, what did witnesses say, all that, which is great of course, more for the patient than anyone else, because some of those details can make the difference between life and death.

We step back while the hospital takes over.
You get curious – put so much work into getting someone there in one piece, you wanna know what happens. But I’ve learned sometimes it’s better to step away. I’ve felt that rush of frustration when you know they’re not putting their all in and things go sour. Watched situations spiral out of control, and there’s nothing we can do from our end. So you step away. You watch, you learn, and then you step back, smile or shake your head, finish the paperwork and go get dinner.