Beyond excited to reveal this stunning cover for my first novel, Half-Resurrection Blues, part of the Bone Street Rumba urban fantasy series from Penguin’s Roc imprint. Y’all…I love this. That’s the Grand Army Plaza behind Carlos, which sits right at the opening of Prospect Park and beside the Brooklyn Public Library. Besides being creepy and beautiful, that memorial used to house a secret puppet museum that you could only go in whenever the little old lady running it happened to be there (always reminded me of those King’s Quest/Space Quest computer games where you just had to wander around hoping the right witch/dragon/dwarf would/wouldn’t be where you went so you could get the secret treasure/not die horribly…but i digress).

It’s thoroughly just right. The Park — well, most of my characters end up there at one point or another fighting evil or finding solace. In HRB it’s the site of transformation and a long romantic walk and the arch itself plays a major role in the plot. Roc was excellent with me in the process, checked in regularly and went back to the drawing board when I had complaints, so a huge thank you to them. 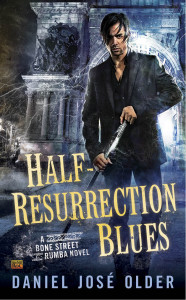