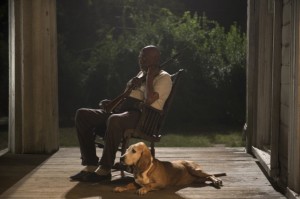 Boardwalk Empire wrapped up last week and while it remains one of the best written/acted/produced/directed shows on TV, the finale left much to be desired. One thing that seems to happen with a lot of HBO shows is the phenomenon of having an outstanding second to last episode and then a sputter out finale. True Blood has done this, the Sopranos did it. Game of Thrones is KING of it: Season 1’s second to last episode was the BeNedding. Season 2’s was the Hellfire battle, season 3 was the Red Wedding. WHAT?? And their finales were…uh, some stuff happened.

Last season, Boardwalk Empire ended with two almost perfect episodes, gathering tension and then releasing in perfectly timed street wars and reunions. I mean…It was a breathless, violent, complex end that tied up just enough loose ends without being tidy or leaving us hanging. This season, the setup was there. Episode 4.11, Havre de Grace, focuses on Chalky’s desperate escape to his old mentor’s country house (the always amazing Louis Gossett Jr.) and the building tension between Nucky and his brother, who’s informing for the FBI. Every scene sizzles with the feeling that someone’s about to get got and with Chalky, you really don’t want it to be him. Dr. Narcisse’s malevolent shadow lurks even he’s not on screen and the closing shootout in front of Oscar’s decrepit old house is expertly filmed. On top of that, you have the gripping climax of Gillian’s betrayal and confession. Really, the show rivals any big screen gangster movie in the past ten, maybe twenty years.

Then comes the finale, much anticipated, and the whole of its action pretty much hinges on this one showdown between Chalky and Dr. N, a moment we’ve literally been waiting for all season. What happens? A missed opportunity, both for Chalky and narratively. The shot aimed for Dr. Narcisse hit the wrong person, chaos erupts, Richard gets hit in the crossfire, walks off to die, Dr. Ngets arrested, Chalky withdraws to Oscar’s country house, essentially becoming his old mentor, Nucky sticks around to pick up the pieces of his broken family now that his brother’s on the run after killing the FBI handler. I mean…it all just sat there. The tension didn’t resolve to much as fizzle out, the status quo remained uneventfully unchallenged and at the end you just feel like, well, that happened. In the words of that famous emo Pisces, I’m just saying you could do better…