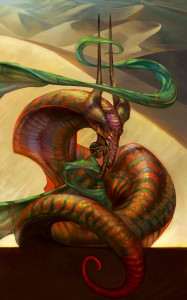 I was gonna call this “Slaying The Non-Fiction Dragon” but then I found this picture by Long Hidden cover artist Julie Dillon and that title ceased to make sense. It was corny anyway.

ANWYAY anyway: If you follow me on twitter, you know that while I’m generally a happy writer, I end up headdesking and ranting & raving all through the night when I try to make essays happen. Fiction is my first language, music probably my second. I can talk a good non-fiction game, if you put me in a room with people listening I have things to say; I even know how to go on tweet deluges about shit I’m passionate about and be more or less somewhat eloquent. Or at least coherent.

But when I sit in front of that blank screen with an essay on the tip of my tongue, the tips of my fingers, whatever, I really end up just sitting there. I procrastinate. I fuck around. Write a sentence. Do a ton of busy work. Write another. I mean…it’s good for getting other shit done, but as far as getting into the flow goes? Epic fail. Part of it is, i hate saying obvious shit. I haaaaate wasting words, repeating myself, walking in rhetorical circles. And with non-fiction, the challenge for me is often figuring out how to cut through the bullshit, not speak to the lowest common denominator but not go way off into the haze either. Feel me? I get caught up.

Also, the challenge of writing fiction is taking all that sorrow and rage and joy and crafting it into a thing of grace. Something that can be understood, but not overly-translating it or letting it get stale in the process. Balance, man. It works me.

Here are some writers/blogs that write with fire and I look up to when I’m feeling lost:

And obviously anything by James Baldwin.

Eventually, I get it together and put some shit up and when I do, it always feels good. Better for the challenge in fact, and then I want to do it again. When I stop procrastinating and make shit happen, this is the method that works best for me. I learned it in high school and it just works. George RR Martin said there are writers that are gardeners and writers that are architects. With fiction, I’m a straight gardener. I walk in with no outline, only a vague idea where all this mess is going and I flow with the way the plants grow, generally. (That’s another post…) But with non-fiction, I need a structure to get me through the chaos.

Step 1: Ideas On The Page – this is where EVERYTHING gets put down. No rules, lots of cursewords and random noises, a total focused freewrite. Loosens the writing muscles (write with your whole body, right? So all of em.) You dump it all out, gonna organize it later. Don’t think, just release.

Step 2: Kill Darlings – there’s gonna be shit in there you don’t need. Amazing ideas, yes, but irrelevant or redundant or tangential or whatever. They gotta go.

Step 4: Organize Chunks – Into a coherent point. Then you have an outline. Usually by this time, most of the language is already on the page and the actual writing part is more a matter of

Step 5: Chop, Add, Smooth Over – flesh on the bones of the outline. Which is 80 billion times less stressful than just sitting down and writing.

How do you approach non-fiction?

2 Replies to “Befriending The Non-Fiction Dragon”